In the rush to get October's Son edited in time for the crucial Halloween deadline, the prequel to Spikez was pushed back to February 2015.

So, what's the story behind Making Trakz?  The video below is one of several used during talks at primary school visits by author, Richard Mayers.

This is one of the publicly released examples highlighting the advances in robotics, and a good example of a real life animal cyborg.  Advancements are probably way ahead by now (this video made in 2007!), but ethically this will not be known to the public for some time.

In Spikez, the lead scientist, Professor Windar, is working on military grade cyborgs to be used in surveillance, but much of his research stems from his success with his first robotically enhanced mouse.

Making Trakz gives readers the backstory behind the likeable sidekick featured in Spikez, explaining his origin and why he wears such big goggles and has tank track feet.  If you don't know what we're talking about, see the picture below. 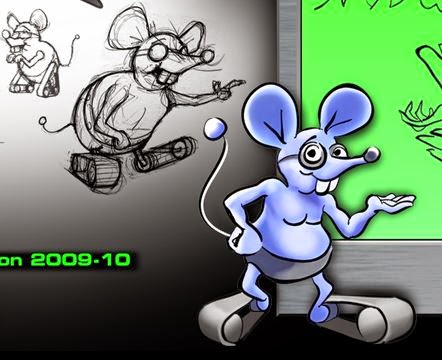 Burton Mayers Books will be releasing more details between now and February, including some chapter excerpts, sketches and cover design concepts.

Posted by Burton Mayers Books at 02:36 No comments: