Having secured some great pictures with John Michaelson, we were faced with the challenge of trying to capture the theme and content of his book in just one image.

We shared the images with John and expressed our desire to use one of him wearing his mask on the front cover.  He was not keen on this idea and stressed that the mask was for public appearances only and that he does not want to be seen as a pantomime villain.  It made sense, since the book is very much about quashing the vampire myths.  We then considered something similar to what he tried originally from his website. 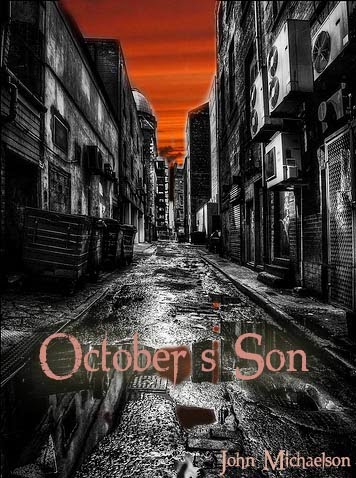 However, John did not have the original and disclosed that it was a found image he happened to come across during his research.  We traced the image down using the web to someone called Paul Cook, so credit due there for capturing such a creepy image.  We then realised that we didn't have many pictures of London without John in them, and with the October publication deadline looming, we began to panic.
We trawled through some of John's own images on the London Vampire Flikr account and suggested those below to him below: 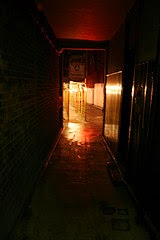 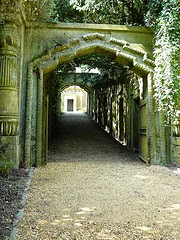 This image had the right darkness and colours but had nothing distinguishable about London. John said it was taken between the Strand and Covent Garden, but didn't say much more other than that there is no longer any scaffolding there.

This image is taken from Highgate Cemetery, but John was keen to stress that he was not trying to create a spin-off of the Highgate Vampire phenomenon. We both agreed that it was a great image. 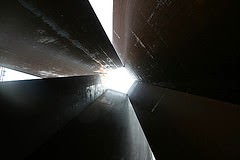 This image is a bit of a mystery.  The angles and light create interesting tones and it's quite creepy and significant in some way.  We're not sure where it was taken, but the problem was that if we cropped it to a book cover it would look too bright and lose the impact we wanted it to have. 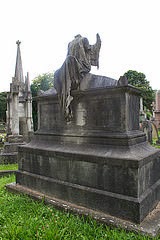 John used this image on his Facebook and we thought it was quite morbid and perhaps significant.  The problem, however, was that we would have to significantly edit and manipulate to add the right level of gloom to match the novel. 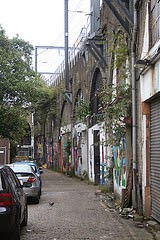 We know that this image is significanat and linked to Camden, which features in the latter part of the book.  Again, John wouldn't say much more than what we figured, but it lacked the level of fright needed to match the tone of his story. 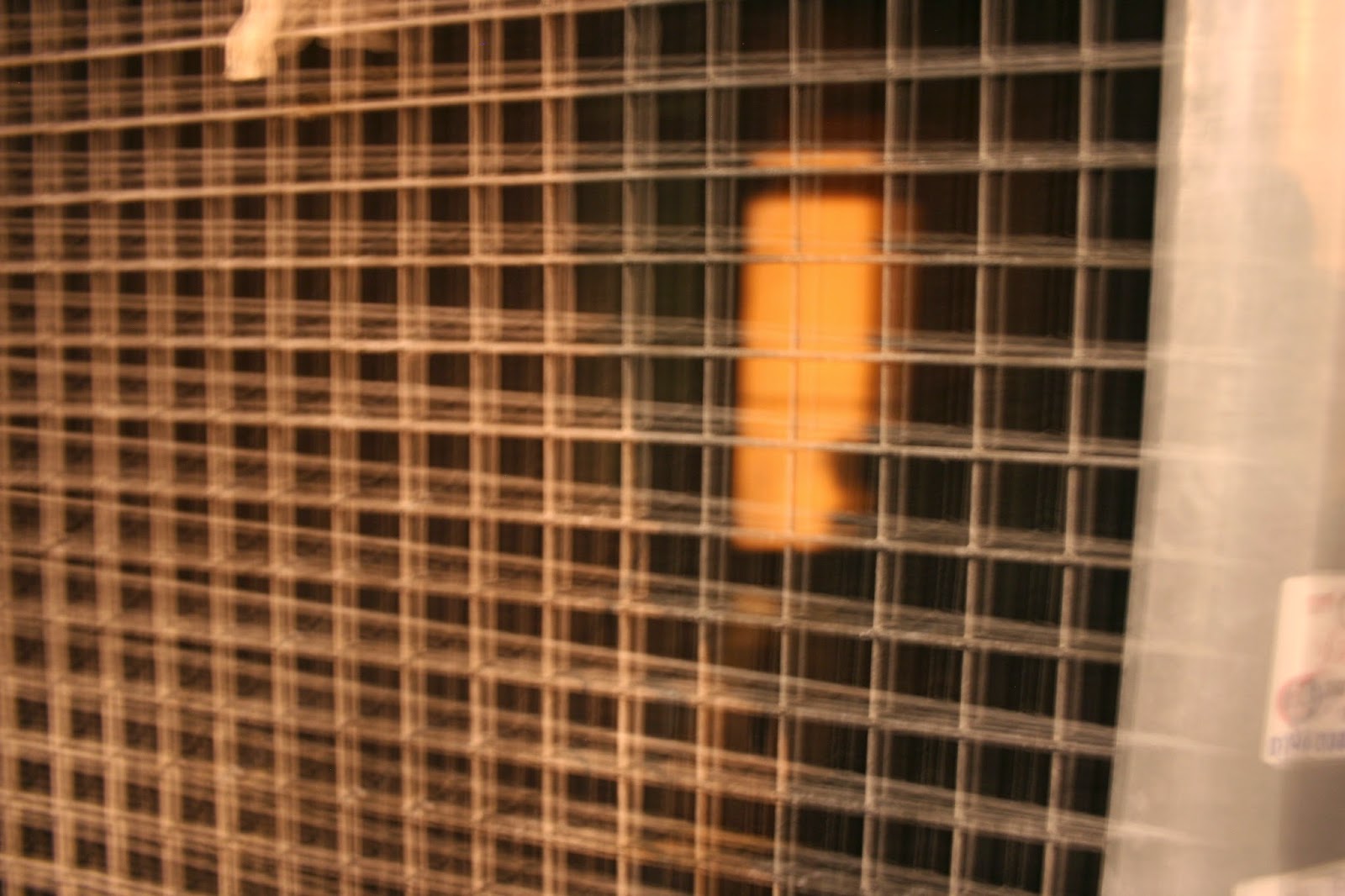 The image above is not far from the type used in generic thrillers and crime novels.  However, we felt we were straying away from the fact that the novel is in London, something we were really eager to convey to international audiences. 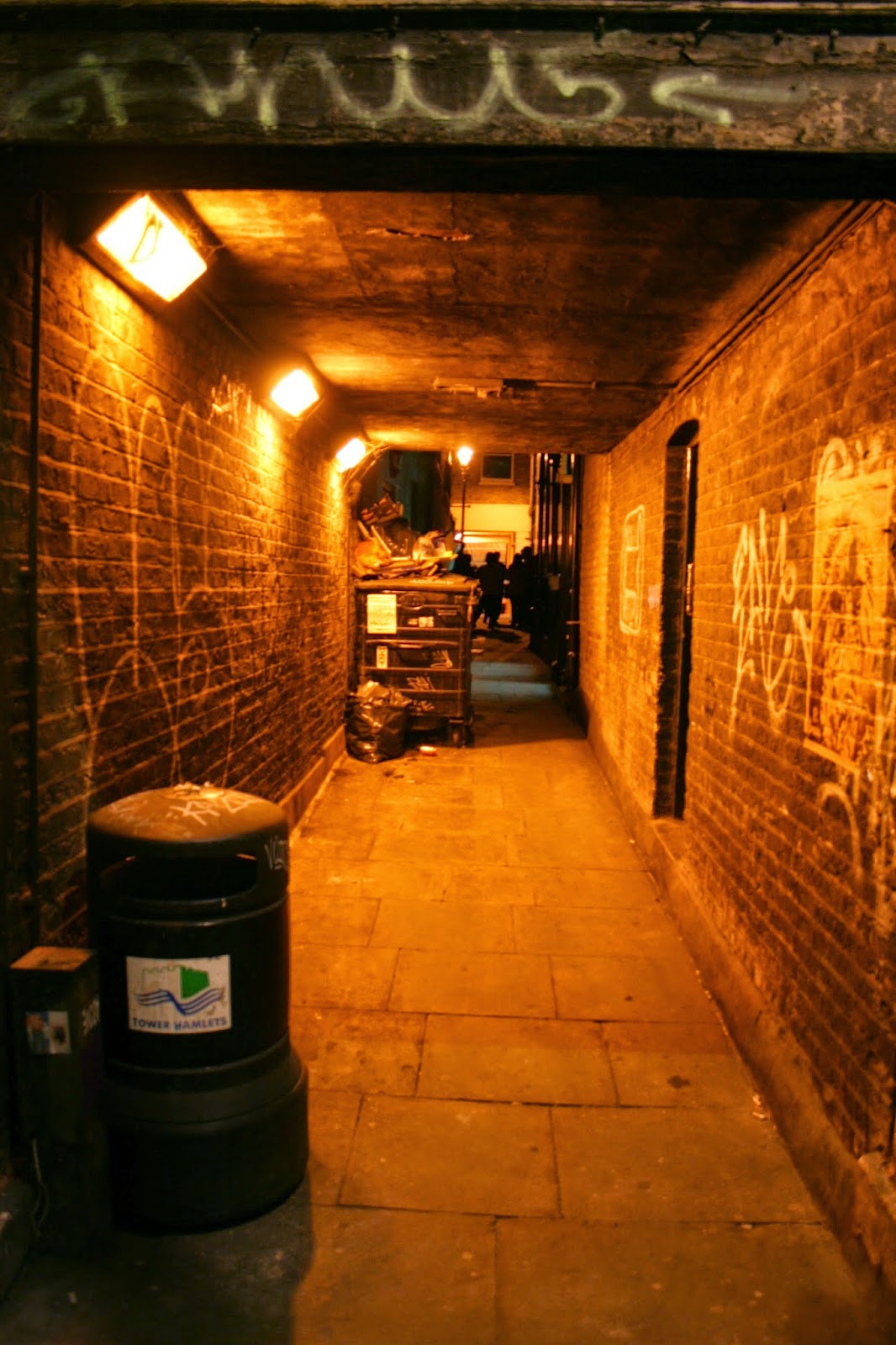 The perspective is there but the the threat was not.  Apparently this was the type of alleyway Jack the Ripper would stalk in Victorian London.

Overall, nothing quite did it for us.  We went back to the drawing board and were planning to reshoot pictures of the capital, when we decided to review the images taken of John near Trafalgar Square and, by chance, found the image that sent shivers down our spine.  It meant significantly cropping to remove John from the image, which meant a drop in definition, but somehow it just worked.

Front
We hope you agree that malice and threat is clearly represented in the cover.  The red fountain, which is not perfectly reflected, is - in our opinion - such a powerful visual metaphor which exemplified John's fight against a murky underworld beneath the sparkling city of London.  Even John was complimentary, which for us was saying something.

Back
And as for the back cover, we persuaded John to let us use one of him sat on St-Martin-in-the-Field.  Not only is the image subtle, but it summed up the experience of the photo-shoot, that he remained unseen, not even attracting attention from the majority of night-crawlers.  In fact, only when we finished editing the cover did we realise that we had managed to include a London bus, a black cab, an art gallery, a church and a significant monument - not to mention The London Vampire himself.  Not bad, we thought.  We hope that you agree.

October's Son: The London Vampire Diaries is available from 27th October 2014 from all good book stores and online.


Posted by Burton Mayers Books at 15:04 No comments:

How do you catch a vampire? Harder still, how do you capture a vampire who claims he isn't a Vampire? Confused?


At Burton Mayers Books, we were faced with the same problem. Ahead of the release of October's Son: The London Vampire Diaries, we set about trying to shoot some images to use on the book cover and for publicity purposes.  John Michaelson is an enigma to say the least, and with no phone number and no known address, getting hold of him is hard at the best of times.  So imagine trying to arrange a meeting with The London Vampire himself.  Well, it happened somehow.

A meeting was arranged via Skype and John agreed to meet in London's thriving China Town.  We arrived and, too our amazement, found John waiting for us.  See picture below. 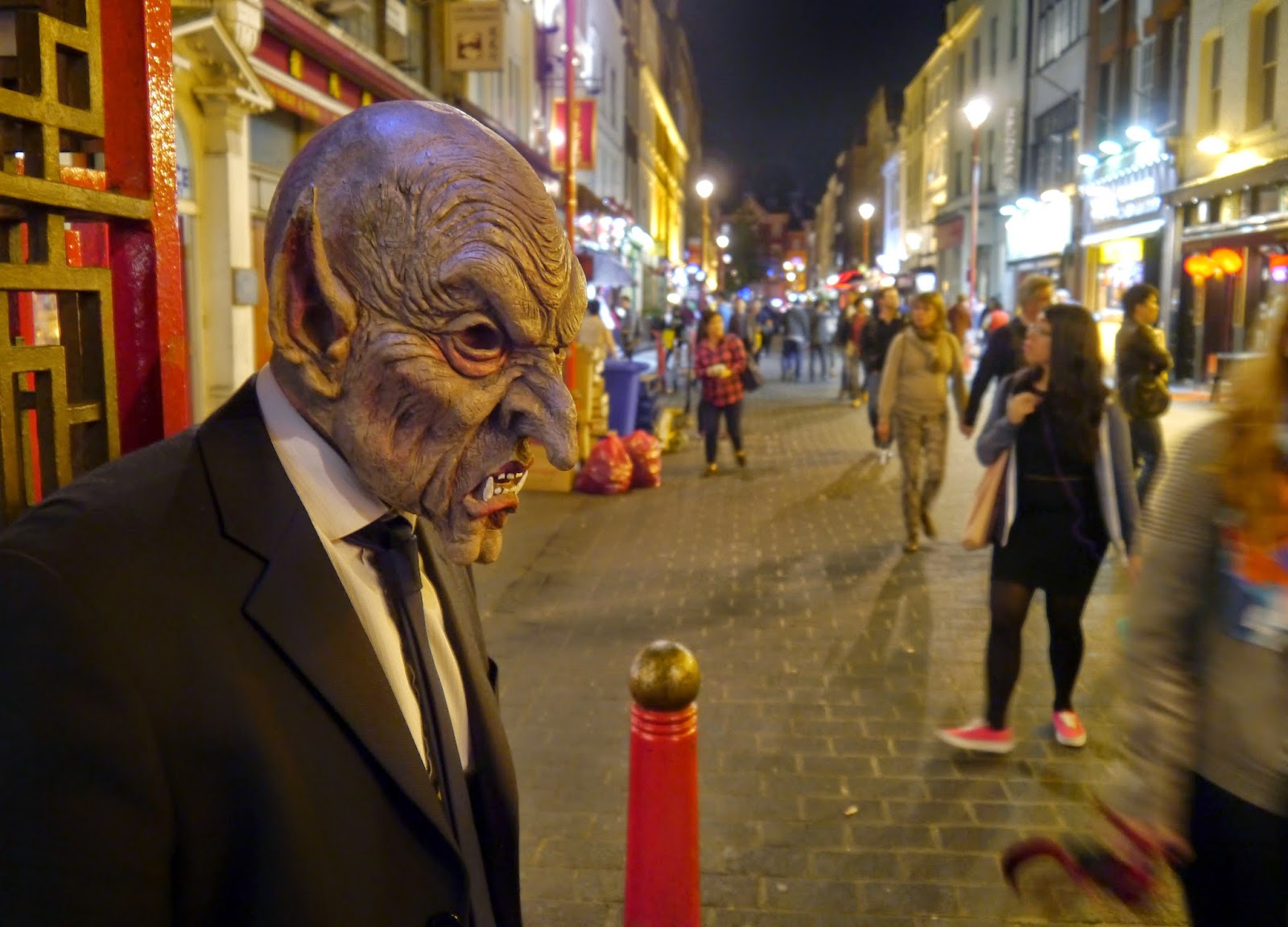 John was resolute about where we could go and take pictures, and warned us that Soho would be off limits that evening; he also stressed that the mask would remain on throughout the whole shoot.  He didn't talk much and seemed to be on a schedule of his own. 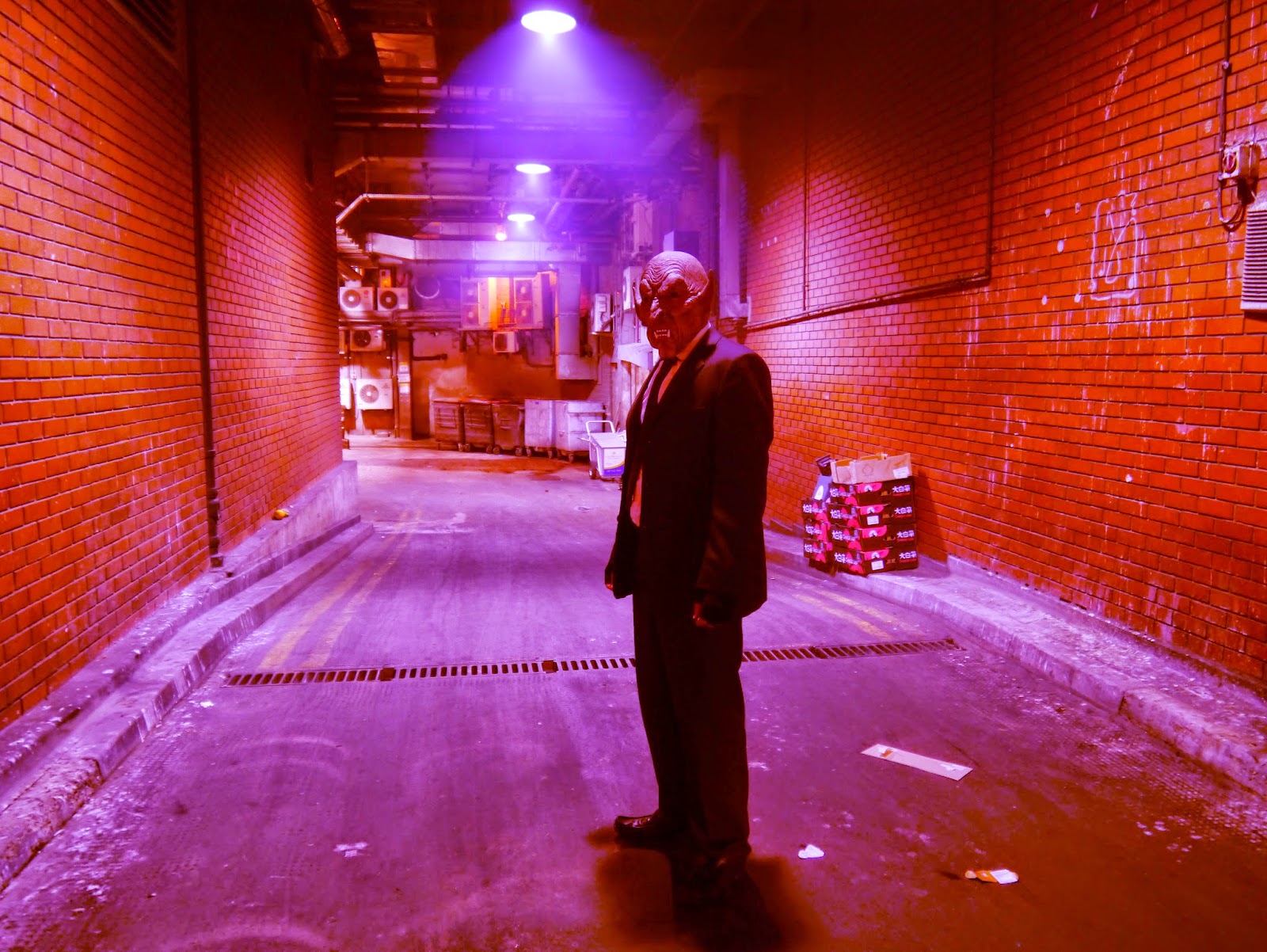 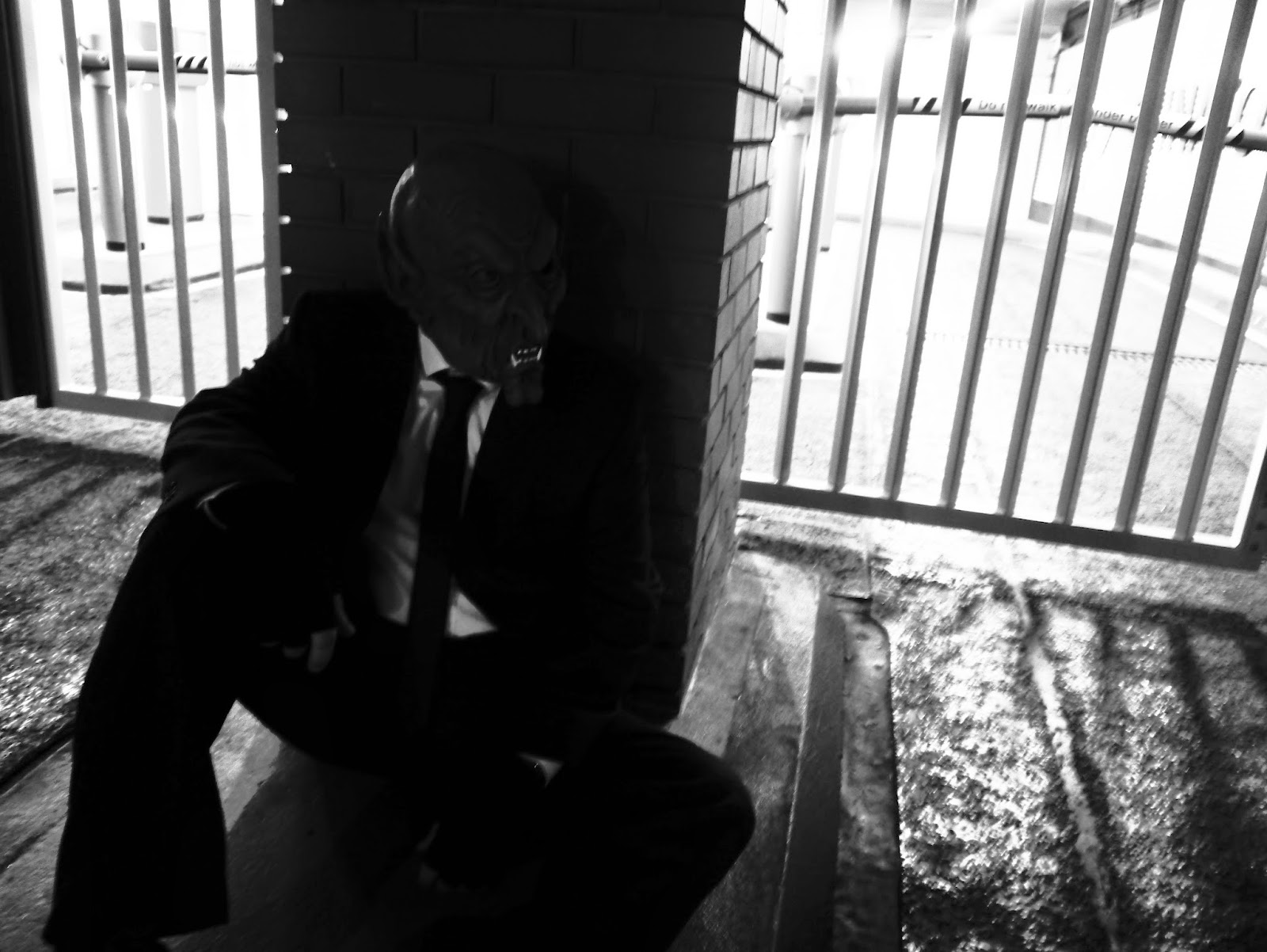 We got some great shots around China Town and it was amazing to see that most people didn't even blink an eye or stop to notice. It was like he didn't exist. 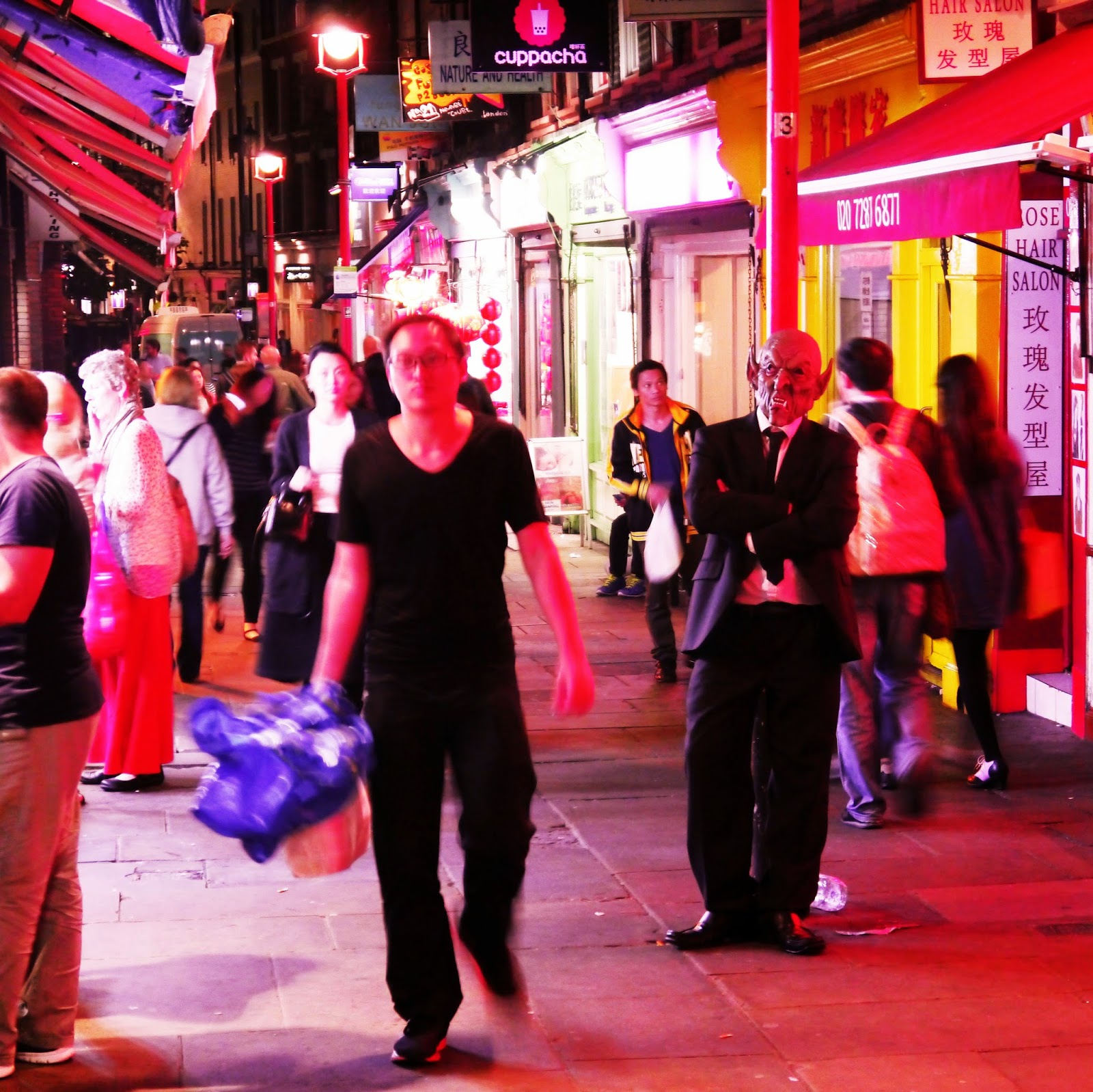 This was especially noticeable in Leicester Square. See below. 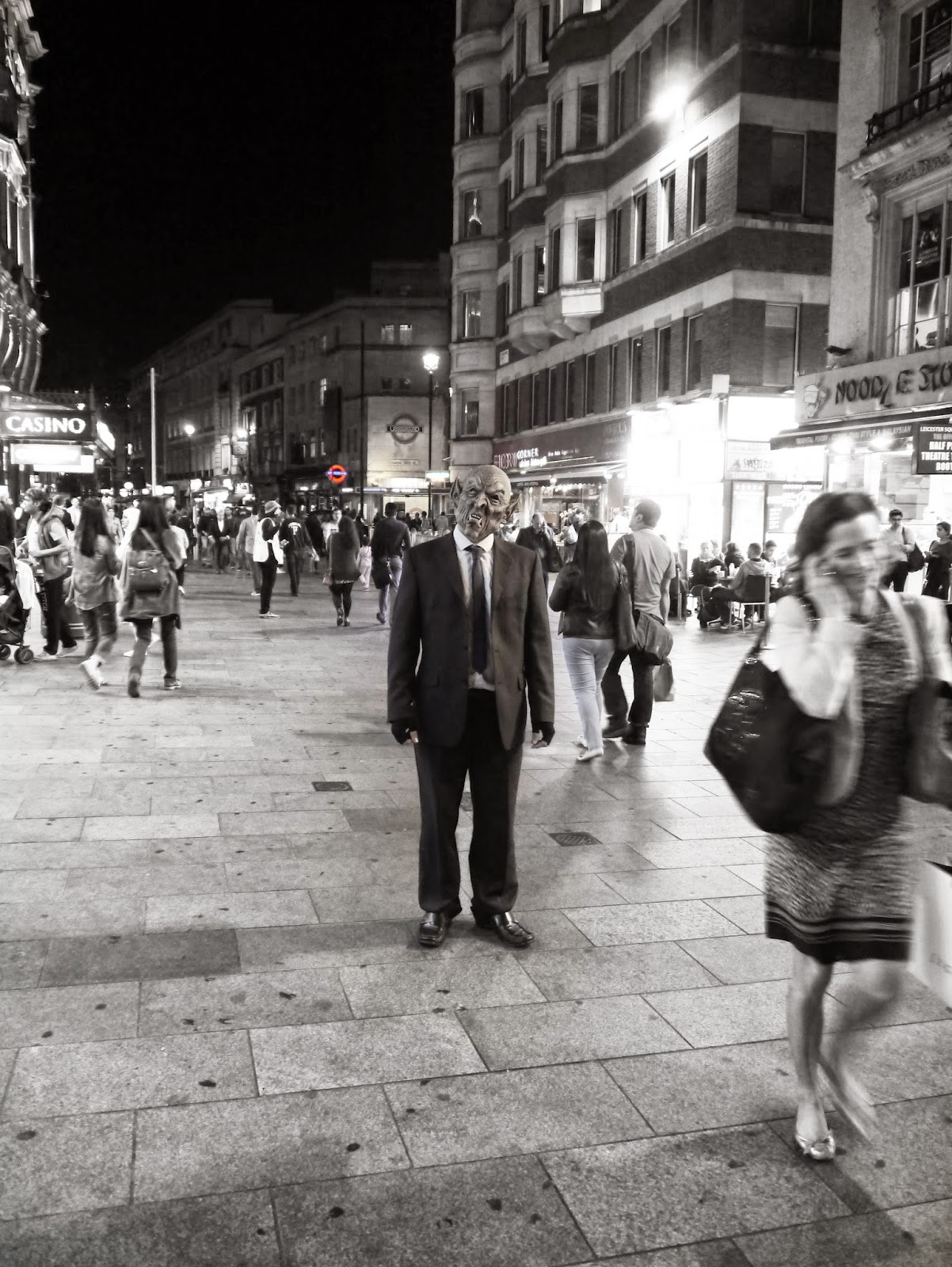 His trail led us through St Martin-in-the-Fields and into Trafalgar Square where we got some amazing shots that we ended up using for the main cover. 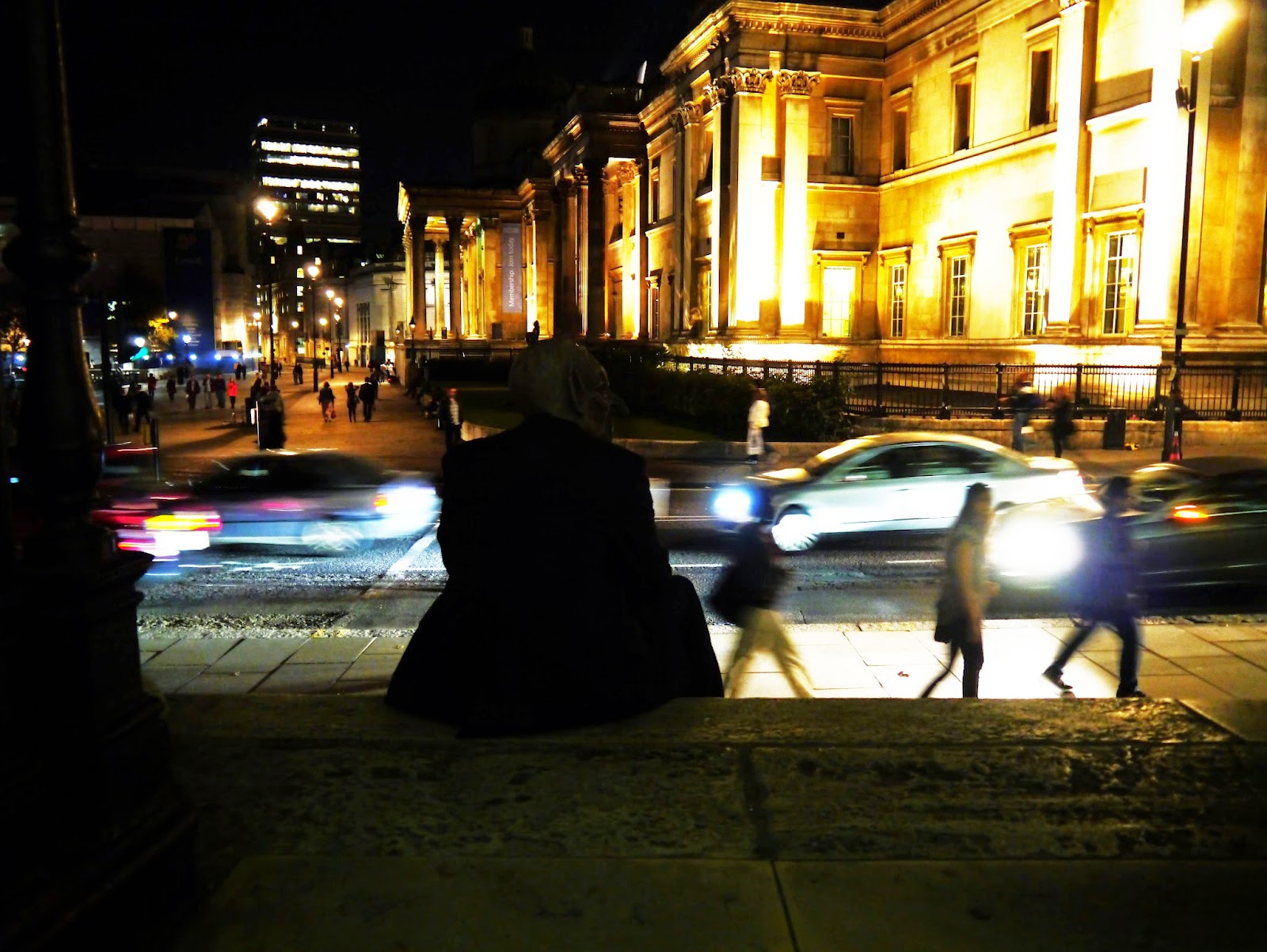 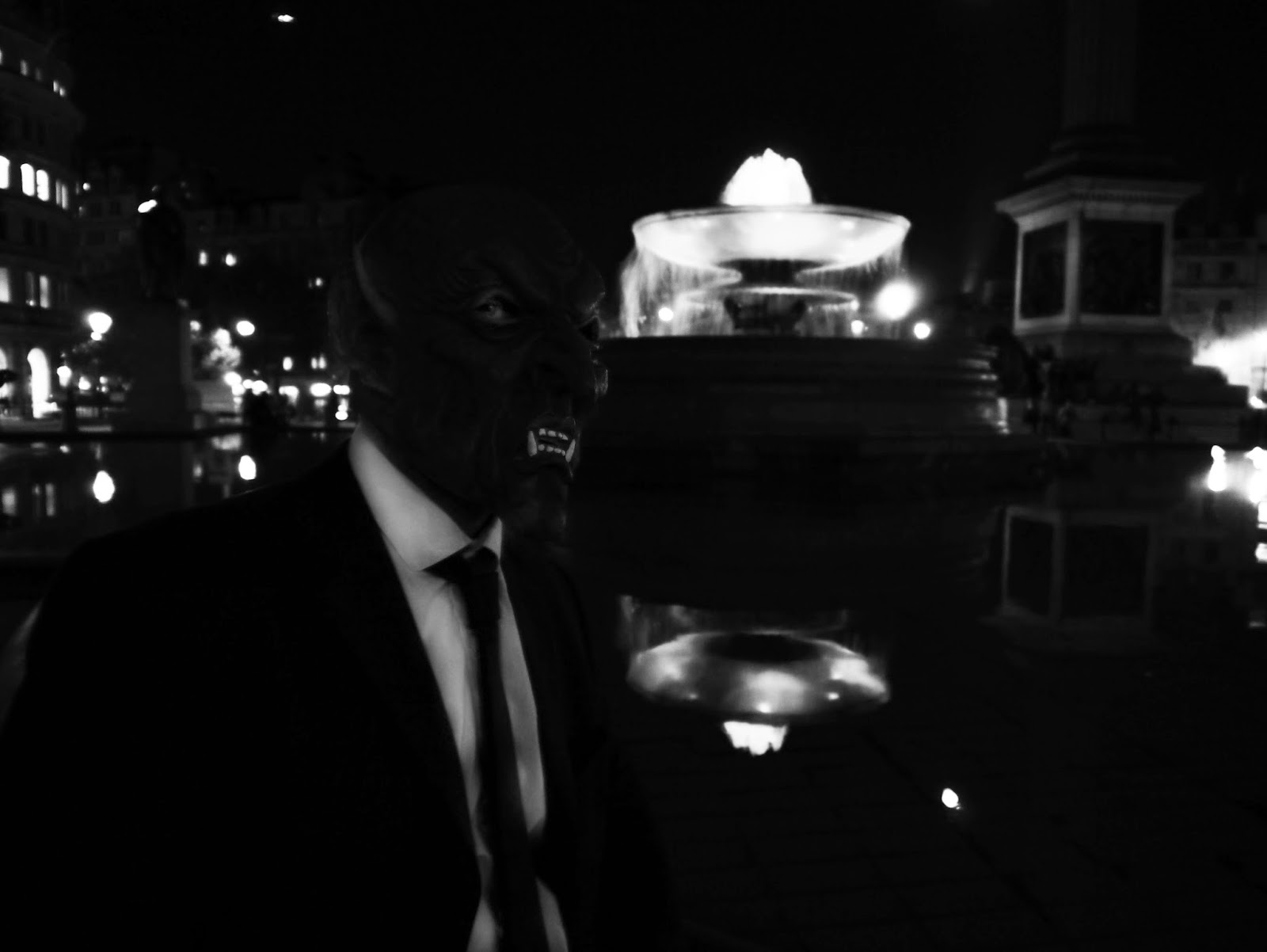 We then followed him towards the river but he suddenly cut through Charing Cross and towards The Savoy where he revealed a bit of the city's history.  Below, Michaelson poses next to the capital's last remaining street lamp fuelled by gas from London's sewers. 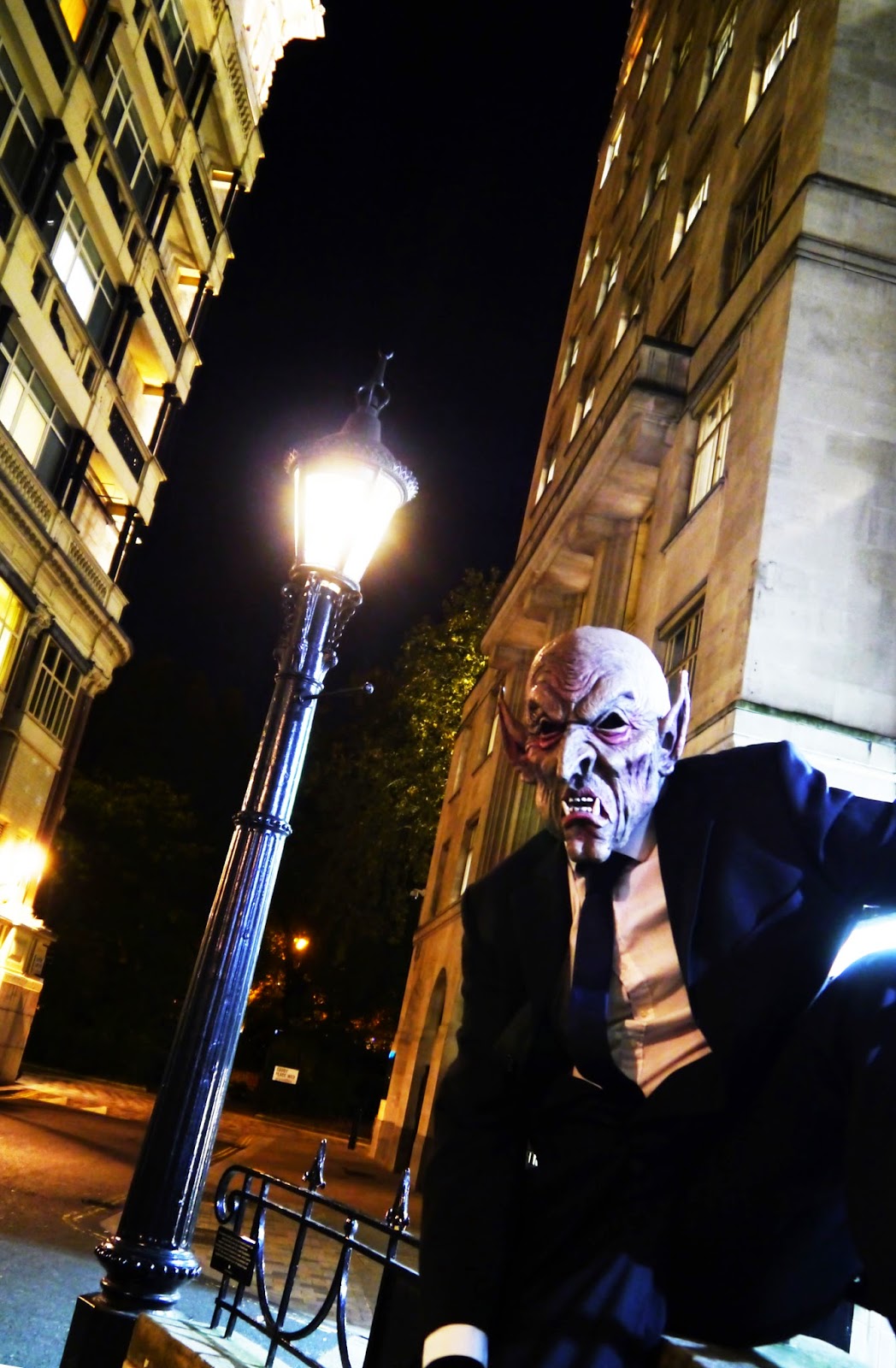 We tried to persuade John into taking some shots along the Thames and across East London, specifically landmarks highlighted in his book.  John declined, however, because he had an appointment to meet a medical graduate nearby.  He didn't say much more before we took these last shots. 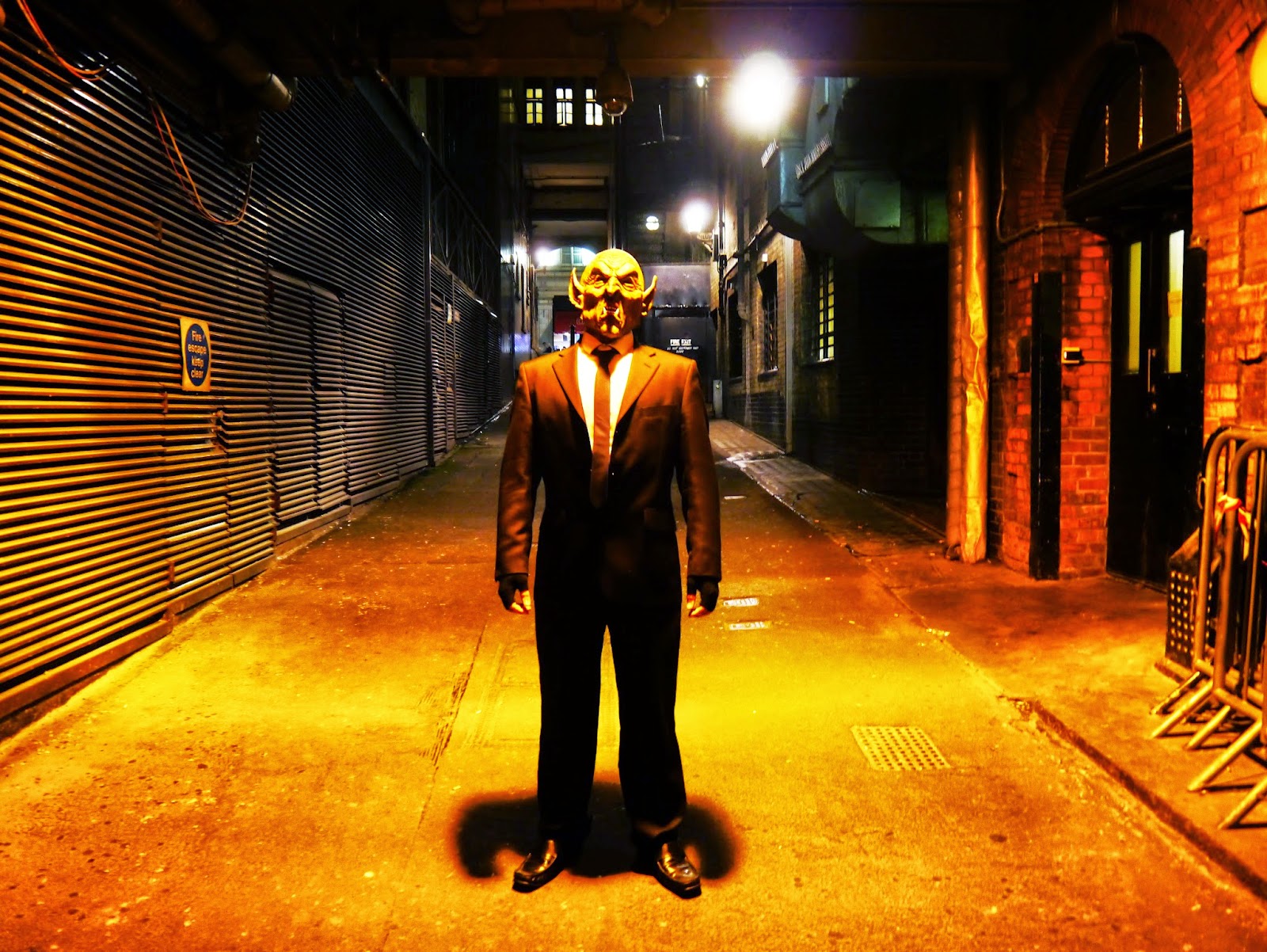 He was courteous, thanked us for our patience and said he looked forward to seeing the final version of the book.  We caught a bus back home with mixed feelings; a little unnerved about what he told us, and perhaps a little safer knowing he was out there watching our backs. 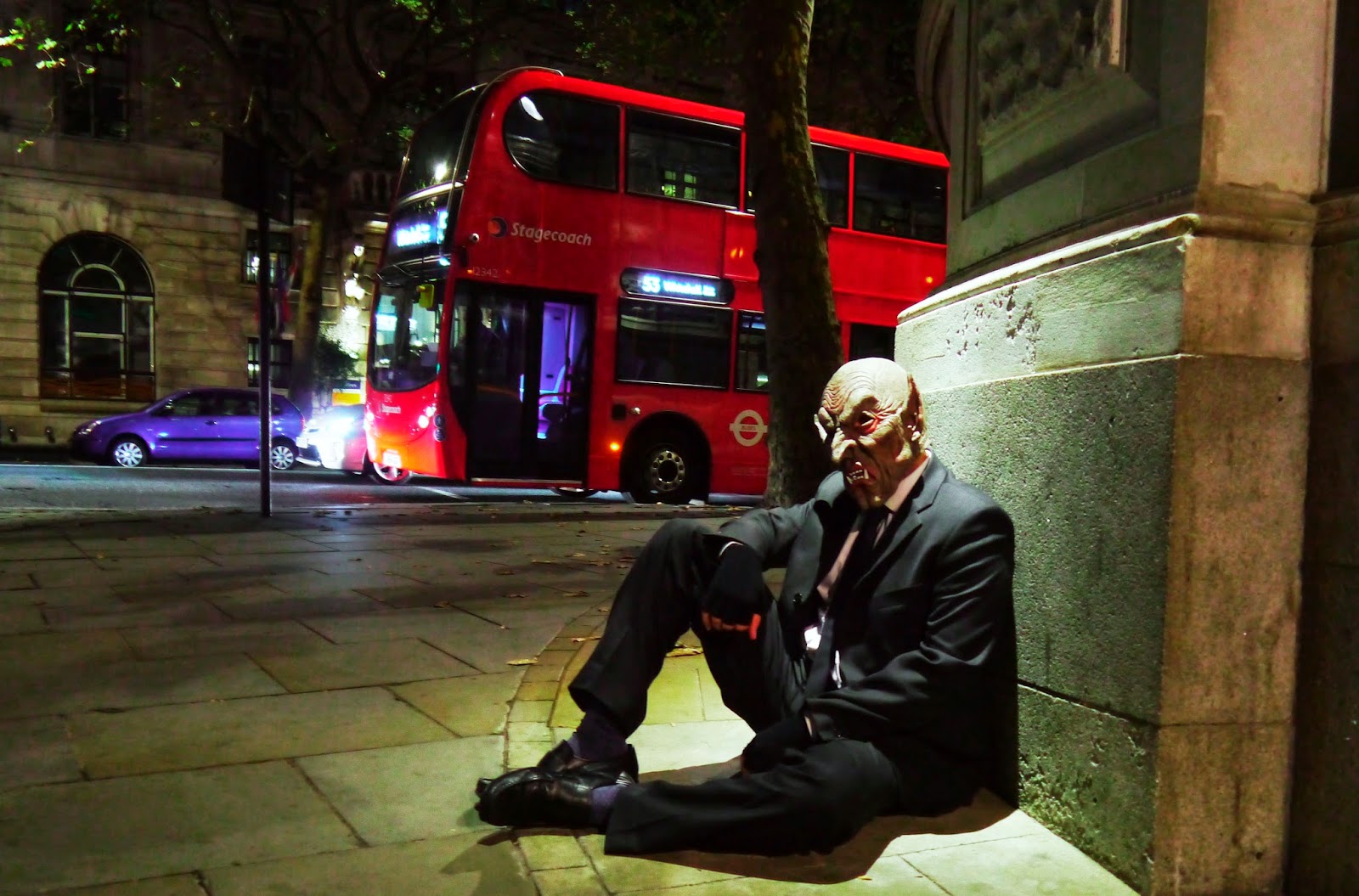 Posted by Burton Mayers Books at 15:06 No comments: