What an amazing week it's going to be. Two days after Shrove Tuesday (pancake day) we have World Book Day! As a teacher, I love seeing how much of an impact good books have on the creativity and imagination of young people.  This year our school is having a day  themed around the wonderful world of Roald Dahl. What will you be doing on World Book Day 2017? 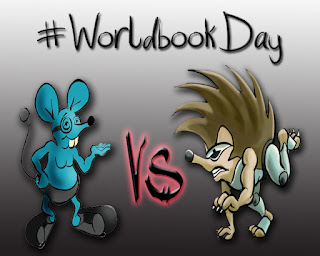 Previously, Burton Mayers Books have made Kindle editions of their titles available at a discounted price during this important event. But because we recognise the impotance of getting children reading books we will be offering our titles: for free.  That's right, we have pitted two of our animal superheroes against each other to see who will become crowned #WorldBookDay king of the animal cyborgs.  Yes, Spikez and Making Trakz will go head to head in the free books chart to see who will be ranked highest under the 'Animal Fiction' category.  Who knows, they may even invade other categories - in 2014 Spikez made it to number 12 in the overall children's fiction category on World Book Day.  Not bad for a robotically enhanced hedgehog.

You can find out more information about each title by clicking the link below and read many of the glowing reviews.

Meet the most unlikely pair of heroes:

Remember to follow us on Twitter @BurtonMayers to track the who is winning and to get your  free copy.

For all hedgehog, rodent, cyborg and pigeon related stories and news, visit www.twitter.com/spikez_novel
Posted by Burton Mayers Books at 14:04 No comments:

In October 2016 we were given a glimpse into the dark, depraved and murky life of the elusive London vampire hunter, John Michaelson, when he disclosed an extract from his forthcoming biography.  It certain whetted our appetites and that of readers, however November, December and January passed without any extra chapters, and editing of the manuscript was unable to take place.  By February, the team at Burton Mayers Books nearly gave up hope that Michaelson would ever deliver his manuscript for Nuptial Flight despite several polite reminders.

That was until recently when Michaelson, in his trademark London vampire style, defied expectations and randomly sent us an encrypted file.  Eventually we were able to download and start unpicking what can only be described as dark material.  Whilst his book is written with a similar degree of humour, honesty and hostility towards those who ruined him in October's Son, there is a noticeable difference in the overall tone - like we are starting to get to know the real John Michaelson, aka The London Vampire.

Little of what is written is being edited down, however the order of  events is less linear and more modular so we are making creative decisions about how best to order the events.  Nuptial Flight dips in and out of key events over a period of nearly eight years rather than a single year and feels more like a biography.  Aside from that, there are very few hurdles limiting us for publishing the title for Spring 2017.  We have ideas for a book cover design which we will be sharing soon and we think you'll love it.  The book is certainly worth the wait.

So keep your eyes peeled and your fingers crossed that we can finally share with people the truth about London's vampires.
Posted by Burton Mayers Books at 15:18 No comments: